Some like to think that the middle class has always been a fixture of American society.  In fact, the rise of a steady and strong middle class didn’t happen until after World War II.  Clearly people can’t look at the economically painful Great Depression, which rampaged the nation from 1929 to 1939 as a good time for average Americans?  In fact, even a few years after World War II the nation hit a few rough patches with price controls and millions of Americans rushing back into the workforce.

But with many of the industrial economies in tatters in Europe and Asia, the U.S. had a well positioned spot for decades of strong growth.  But make no mistake by looking at history that we were producing and manufacturing goods for the world.  And things seemed to work out well for many Americans even with a robust manufacturing base. 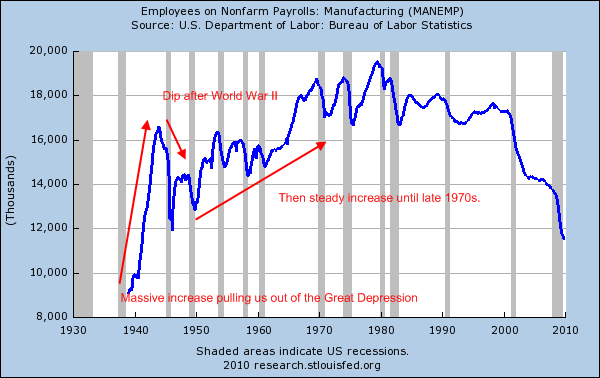 The above chart is extremely telling.  There are many reasons and explanations for the Great Depression but World War II clearly got our employment machine going.  That is something that we are struggling with today.  After all, even with the two wars going on today, much of the warfare doesn’t require heavy machinery like fleets of tanks.  What use are thousands of tanks if someone with an improvised explosive can do just as much damage?  So simply saying war is what will drag an economy into production is not necessarily true especially in the modern era.

The middle class today has it very different from the same family in the 1950s.  Back then, one blue collar income was enough for the purchase of a modest house, a car, and a bit of money for savings without going into massive amounts of debt.  That is no longer the case.  Even though in the last year debt loads have fallen (because of bankruptcy and millions of foreclosures) American households are still highly over leveraged with debt: 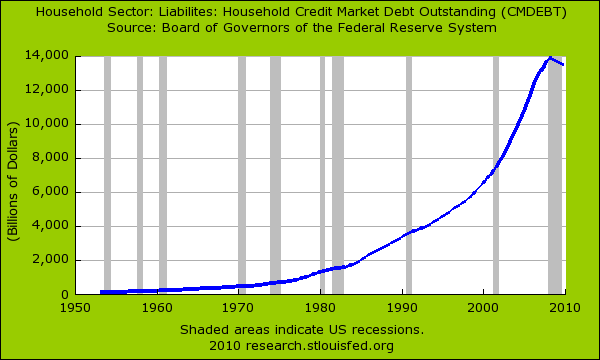 Here is some stunning data for comparison:

So we went from household debt being 27 percent of GDP to where we are today where household debt is nearly 100 percent of GDP.  This is clearly unsupportable and as the chart above shows, we can expect more deleveraging in the years to come.  As Stein’s Law will have it “if something cannot go on forever, it will stop.”

Since the 1970s, strong regulations that were in place to keep the banking industry in check have come off letting the wild hyena loose.  Those that argue today that we have too much regulation are right but it is weak regulation in agencies that have no power (obviously since this decade was a Wall Street Wild West).  Simple regulations like usury or even checking income before making a loan were all removed.  So in 50 years, we went from very little debt and high levels of production to massive consumption fueled by easy money.  But when things went bust the net was pulled for average Americans while Wall Street racked up trillions in taxpayer money.

Since you need an army for this kind of fraud, this is what has happened over the decades: 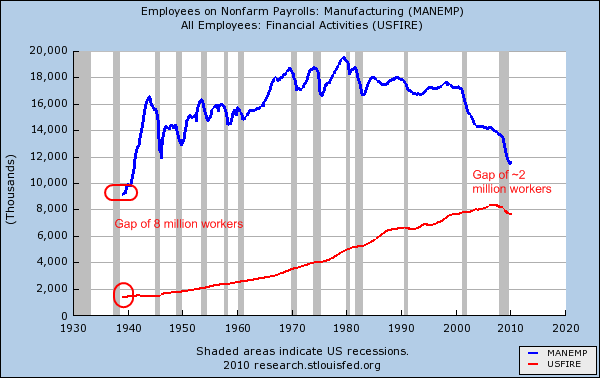 As the manufacturing base slowly drifted away starting in the late 1970s the financial and real estate part of the employment equation exploded.  With massive amounts of deregulation, capital flowed to any industry regardless of the long-term implications to the U.S.  We are seeing some of those longer term trends now hitting us.  At this point, it is like reversing the Queen Mary in the middle of the ocean.  This is actually an important debate to have yet few are exploring this at least at the national level.  Some use the price point argument.  They argue that it is fantastic that we can get cheap goods from other countries.  But they usually ignore the cost (see above).  In an ideal world, there would be a balance between exports and imports for any country.  These are usually your perfect case examples in economics.  But right now, if we look at our trade deficit with China for example it is anything but balanced.  Is it any wonder the U.S. Treasury walks on a fine line when discussing policies with China?

Many multi-national companies are doing well in this recession even though we have an underemployment rate of 20%: 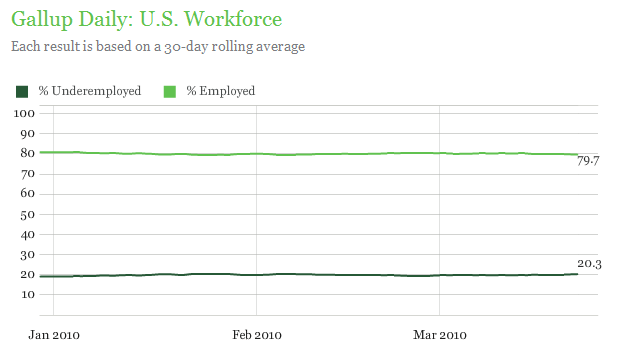 If you would have asked someone if you could envision a 70 percent stock market rally while 20% of Americans were unemployed or underemployed people would have laughed.  But that is the new structure we currently have with the corporatacracy running the system especially when it comes to financial reform.

Think of all the horrible short-term policies that have led us to this mess.  What benefit did we get by offering zero down toxic adjustable rate no verification mortgages?  The only benefit came from mortgage brokers getting $10,000, $15,000, and even $20,000 commissions by putting Americans into toxic financial time bombs.  The other winner was Wall Street who then packaged this waste and sold it off to investors globally but also found its way into the funds of many American pensions and retirement accounts.  How did this help our economy?  What use did this serve?  Or what about the billions in overdraft fees usually pushed on the poorest in our country?  The notion that anything can go flies in the face of thousands of years of human history.  Wall Street made trillions gambling and making money on short-term instruments that really did not improve the overall economy.  In fact, they were parasites that have now created this deep financial mess we are in.  And here we are with no serious financial reform over two years into the crisis.

One thing that really isn’t talked about is whether we want to protect the middle class.  This is a legitimate debate we should be having and should be priority number one.  So far, the banking angle has been that without the enormous bailouts, the middle class would have suffered.  This was of course merely fear mongering to make sure the financial structure stayed in place.  If we continue on this current path, a Japan like scenario in terms of part-time employment is possible.  A population where a third of their workforce is employed part-time yet headline unemployment is at 4 or 5 percent.  And this notion that we have no money is absurd because that hasn’t stopped Wall Street from getting $13 trillion in bailout funds.  We may not have the money but somehow we were able to funnel that much there way while the middle class is feeling the pinch from every angle.