The Future of Real Estate Shopping

From The New York Times

Portable Real Estate Listings -- but With a Difference

Open the mobile phone application offered by a French real estate agency and point your phone at a building along the Champs-Élysées or some other street in Paris. Within seconds, you will see the property’s value per square meter, superimposed over a live image of the building streamed through the phone’s camera. 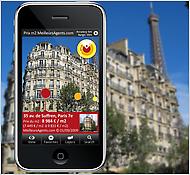 An illustration of augmented reality technology.

Speed and convenience delivered with the aim of a smartphone. Could this be the new frontier of on-demand property search?

It depends whom you ask.

The application, engineered by Layar, a 10-month-old company based in Amsterdam, uses “augmented reality” technology, or A.R., to harness a phone’s camera, global positioning system and compass. Elements like statistics and 3-D images are, essentially, layered over a live picture so the user gets a single view with all available information.

These A.R. “mash-ups” already are being used to display information about tourist sites, chart subway stops and restaurants, allow interior designers to superimpose new furniture or color schemes on a room, and give crime statistics for a specific area.

The A.R. Beatles Tour, for example, superimposes videos and 3-D models, like a yellow submarine, when a smartphone with the application is pointed at locations in London and Liverpool that were significant in the band’s career.

But, “does it provide users with information that they find valuable?” asked Simon Baker, chief executive of Classified Ad Ventures, the publisher of an online real estate site called Property Portal Watch. “Is there real value in using it? Will it fundamentally replace the way we do things? Or is it a gimmick?”

According to the French agency, MeilleursAgents.com, the results have been positive. Julien Cheyssial, one of the agency’s founders and its chief technology officer, said it took a developer only two days to customize the Layar browser with prices, based on city and agency records, and GPS coordinates. Since the agency’s version of the application was introduced in August 2008, he said, there have been several thousand downloads a week.

“The feedback has been totally great so far,” Mr. Cheyssial said. “It didn’t cost us much to set up; we didn’t have to spend too much time on it, and we’ve won many clients through it.” The agency plans to expand it to other French cities, including Lyon and Marseilles.

Real estate businesses in Britain, the Netherlands and the United States already have about 35 similar applications using Layar, and more are being created in other parts of Europe as well as Russia, Australia, Korea and Japan, according to Maarten Lens-FitzGerald, one of Layar’s founders.

“There’s a lot of capital, a lot of money in real estate so we expect realtor brands to use it as a service to their customers and customers to use it just out of curiosity,” he said.

Over all, Layar, which is an open platform, has attracted 1,000 developers who have created 2,000 programs for the iPhone 3GS and Google’s Android operating system.

Other A.R. developers, meanwhile, are using their own versions of the technology for a similar range of uses, including real estate searches.

Mobile A.R. applications started to become more common last year and are multiplying rapidly, with both Google and Microsoft working on their own versions. Juniper Research, a telecommunications analyst based in Britain, expects the mobile A.R. market to have annual revenue of $732 million by 2014.

Layar already has deals with Samsung and LG to install the technology on some mobile devices; Mr. Lens-FitzGerald expects it will have millions of users by the end of the year. “We help you browse the world,” he said. “For example, there’s a new market hall being built in Rotterdam. You can see what the new building will look like in 3-D using Layar.”

ZipRealty.com, a Web-based agency in Emeryville, California, introduced in February an iPhone application using A.R. technology that it developed in-house. The application, HomeScan, uses a phone’s camera to display a home over a live feed along with size and value estimates, interior photos and data on other homes for sale nearby.

“The feedback we’re getting is that customers want all of the features from the Web in their hands,” said Leslie Tyler, a ZipRealty spokeswoman. “Mobile is well suited for searching for homes that are for sale, because you’re out and about. It’s a very compelling partner to desktop search. People use the Web on Mondays and Tuesdays, and use mobile search on weekends.”

“You can look at a map and see what properties have sold around you and for how much. But with augmented reality, it’s easier to see,” she added. “As opposed to seeing the home as a pin on a map, you get it in 3-D. It’s the same info. But the experience of looking at it is more interesting.”

Ms. Tyler said daily page views of the agency’s Web site had increased as much as 150 percent since HomeScan was introduced and that it has been one of the most popular free downloads in the iTunes App Store.

For some time consumers have been using mobile devices for basic searches. Zillow, the Seattle-based service famous in the United States for linking a large database of property values to 3-D mapping, began with a Web site. Now, it says, its iPhone application has been downloaded one million times.

Mr. Baker of Classified Ad Ventures said mobile real estate searches will continue to increase, but he doesn’t believe A.R. or other enhancements will be the reason. “The core is search,” he said. “Virtual tours and photos and video are things that have been bolted on to search. They’re add-ons.”

Yet developers say A.R. searches are just the tip of what will be possible. Microsoft, for example, is trying to allow desktop users to access live streams from mobile devices and superimpose them on a 3-D image of an area.

But such innovations also could lead to legal challenges and privacy complaints. Officials in Switzerland and Germany have objected to Google’s taking pictures of homes and storefronts for Street View, a service that could be adapted to include an A.R. function. And the British media have reported that photographers are being told they cannot shoot in locations ranging from transport stations to the areas around schools and playgrounds.

Yet even the French, who traditionally are reticent to talk about real estate prices, seem to be welcoming information. “French people area asking for more transparency on prices,” said Mr. Cheyssial of MeilleursAgents. “There’s no trust between agents and owners — and we are trying to build a link between the two by giving that transparency.”

“Augmented reality is a new medium,” Mr. Lens-FitzGerald said. “There will be some thing at some point in time that someone won’t like. It’s going to happen.”

“We’ve thought of everything, but there are some things you can’t anticipate because those things aren’t yet possible,” he added. “It’s part of the maturing of this medium.”